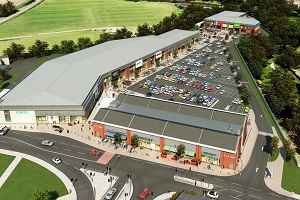 Kirkstall Bridge Shopping Park opened its doors to the public for the first time at 10am on 30 October, offering a brand new retail destination for shoppers in Kirkstall. Located just off the A65, less than three miles north west of Leeds city centre, the shopping park has created 120,000 sq ft of retail and leisure space for up to 18 stores.

The £40 million development, which was officially opened by Leeds West MP Rachel Reeves on 6 November has created more than 200 jobs for the area.

Another feature of Kirkstall Bridge Shopping Park included the commissioning of a new clock tower meeting point. A clock tower has been a feature of the site since the 1930s, when the Thrift Store Ltd was in occupation.

A leak detection system has been installed on site to identify any underground leaks to the water supplies serving each of the retail units. All of the water meters on site are connected via an M-Bus network and interfaced via a SIP to a Trend IQ4 controller. The total usage of all meters is summated over a 24 hour period and compared against the site boundary meter and if exceeded then provides an audible and visual alarm in the facilities office.